Openshift is a cloud-based Kubernetes service by RedHat. OpenShift routes enable access to pods (one or more containers deployed in a cluster) from external resources. In most cases, applications deployed on OpenShift expose external endpoints to the outside of the cluster through a router.

For example, if your Kubernetes workload is a web API (or any other interface external users need to access), you need to provide a route to the particular service or pod within OpenShift to access the required application or service. Each route consists of a name (limited to 63 characters), a service selector, and an optional security configuration.

To help you better understand the topic, we’ll take a closer look at the types of OpenShift routes and different methods for configuration and troubleshooting.

There are two types of OpenShift routes:

Let’s start by looking at an unsecured route example.

Unsecured Routes in OpenShift use plaintext HTTP communication. You can create OpenShift routes through GUI/web console or CLI (command line interface). Below, we’ll walk through both methods

How to Create an Unsecured Route by Using Web Console

To create a route using the Web Console, navigate to the “Routes” page under the “Application” section. Select the "Create Route" option to configure and create the route.

How to Create an Unsecured Route Using CLI

Use the following command to create an unsecured route

Below is the YAML definition for Unsecured Route Object:

Unsecured routes are much easier to maintain because they do not require a key or certificate.

Path-Based routes allow for a path to be specified within the route. It is then compared against a URL to either allow or disallow the traffic. Traffic for a Path-Based route should be HTTP-based (unsecured). The same hostname can be used to configure multiple routes, each with its path. The URL is compared to the routes, and the most specific route (best match) is chosen. In the case of multiple routes, the comparison will move to the following route until the best match is found. This is all configurable, and the comparison criteria can be configured in the router. The hostname and paths are sent back to the server for it to respond to its requests successfully.

On the other hand, if the route www.example.com is compared to the URL www.example.com/test, it will allow traffic based on the comparison match with the host and not the route.

Here is the YAML for an unsecured route with a path:

As the name suggests, Secured Routes are secured with TLS by providing a key and certificate. Secure routes offer various TLS terminations to serve certificates to the client. A TLS termination is the process of decrypting encrypted traffic. In OpenShift, TLS termination means terminating TLS encryption before passing the traffic to the required service or pod. Routers support edge, passthrough, and re-encryption termination.

TLS Termination in OpenShift uses SNI (Server Name Indication). SNI is an extension of the Transport Layer Security (TLS) network protocol. The client indicates which hostname it is trying to connect to at the beginning of the TLS handshake.

Non-SNI traffic routed to the secure port (default 443) is assigned a default certificate that most likely will not match the hostname, resulting in an authentication error.

You can learn more about secured routes in the OpenShift Route documentation.

OpenShift and the SNI Communication Flow

Below is an overview of an SNI communication flow:

Secured routes can use one of three types of secure TLS termination. The type of termination is determined by where the encryption is being terminated. The three termination types are:

In the sections below, we’ll take a closer look at each type of termination.

Note: Certificate/Key pair must be created in PEM-encoded format and should exist in the path folder before running the above command.

Below is the YAML for a Secured Route using Edge Termination:

insecureEdgeTerminationPolicy is the attribute used to configure what happens with this type of traffic. The three values representing the goal discussed above are None or empty, Allow or Redirect.

Below is the YAML for A Secured Route using Edge Termination allowing HTTP Traffic:

Below is the YAML for a Secured Route Using Edge Termination redirecting HTTP traffic to HTTPS:

Get Your Free Trial

Quickly and easily run a Densify trial alongside any other solution and we will prove why Densify is the gold standard for optimization. See results in less than 48 hours. 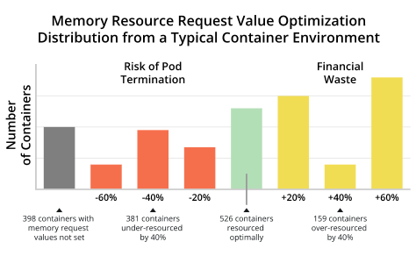 The following command is used to create passthrough termination:

Below is the YAML for a Secured Route using Passthrough Termination:

Re-encryption is Edge Termination with encapsulation. The termination happens at the router the same way it does in Edge Termination. However, instead of forwarding the insecure traffic to the Pod, blocking it, or redirecting it (which can be specified using insecureEdgeTerminationPolicy field), the router re-encrypts the traffic before sending it off to the destination.

The re-encryption certificate can use a different certificate depending on the endpoint requirement. This secures the entire path, even the internal communication

The screenshot below shows how Re-encryption Termination is configured using the OpenShift GUI.

Note: Certificate/Key pair must be created in PEM-encoded format and should exist in the path folder before running the above command.

Below is the YAML for a Secured Route using Re-Encrypt Termination:

Since Re-encryption Termination is the same as Edge Termination for the initial TLS termination, its routes will have insecureEdgeTerminationPolicy with all the same values as Edge-Terminated routes.

To help you get started with basic troubleshooting for OpenShift routes and applications, let's assume you have a service configured in a cluster and a user is trying to access this service from outside the cluster. They can’t access the service and you need to figure out why. Below, we’ll walk through some steps to help troubleshoot.

You know there needs to be a process configured to listen on a public IP for any external user attempting to access the service for this to work. A route is also required for the traffic inside the cluster if an attempt to reach the service has been made externally.

The command given below is run on the machine where the issue occurs to determine if the service is running. This is used if the HTTP service is unavailable from outside the cluster.

Next, you should check if DNS is working. Only do this if the previous command returns output suggesting that the service is running internally, but there may b an issue with DNS.

The command above should resolve the given URL to an IP address. This shows that the URL can be resolved externally. If it doesn't resolve, there is an issue with the DNS.

However, if the URL resolves or it starts to resolve after fixing the DNS issue, and the service is still not accessible externally, you should continue troubleshooting. The next step is to telnet to the resolved IP address against the port your service is running on.

The command should result in this output.

If the router is not listening on the specified port, it will return the following error.

Or the following error if there is no service listening on the IP address.

In either case, we will then need to troubleshoot the router. You can find information on OpenShift network troubleshooting here.

To check if the application route is working, run the oc get route command. This command lists the running routes in the current namespace. If it gives the output and shows that the route is working, there is no issue in the route.

If the oc get route command shows that the route is not working, then run the command oc describe route "route name" to get a detailed description of the issue. This will help to identify and fix the issue.

That covers the basics of OpenShift route and application troubleshooting. For a deeper dive, see the Troubleshooting section of the OpenShift admin guide.

OpenShift allows different types of routes to be configured depending on the use case. With the ever-growing security challenges, the focus on the Zero Trust security principle is the way forward for organizations. Even though OpenShift allows certain route types to be configured without end-to-end encryption, it is best to keep the environment as secure as possible and use Passthrough and Re-encryption Termination whenever possible.