Modern core and processor based software licensing models like the ones available for Microsoft’s Windows Server - Data Center Edition software licensing, enables you to license an entire physical host server and run an unlimited number of instances on that machine. To take advantage of this model, you need to place VMs with a view to minimize host licensing requirements and maximize density. Densify optimizes placements to do just that, saving you an average of 55% on Microsoft Windows Server - Data Center Edition by: 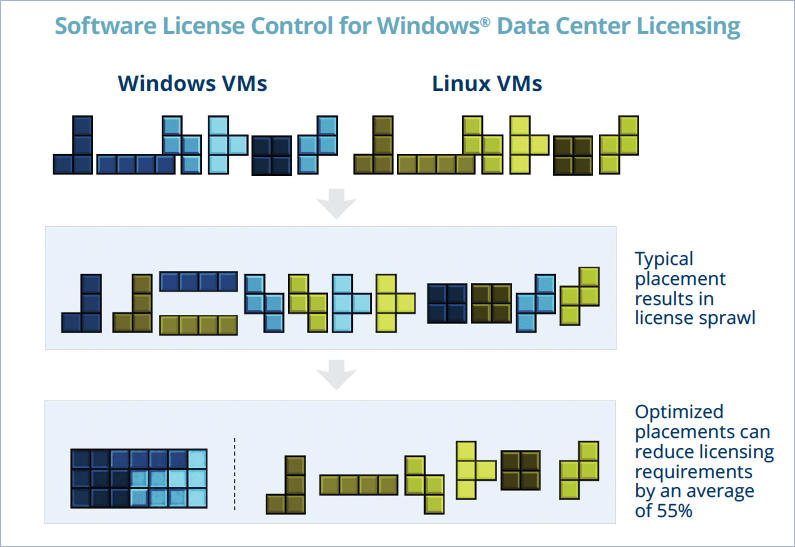 Critical to keeping control over time is ensuring that as new VMs enter the environment that require the license, they land on licensed servers and VMs are fit together across the licensed hosts in order to maximize efficiency. Densify optimizes placements for:

Fix the Problem Before Renewals Are Due.

Don’t wait to address licensing until renewal time or when you run out. Optimizing environments even mid-contract helps manage growth to avoid expansion and when it comes time to renew, you have an accurate handle on what you require now, in the future to save on maintenance.

Densify has been leveraged to optimize packages including

Get Started with Densify™

Begin optimizing all your clouds by connecting to Densify™ for free. An assigned Cloud Advisor is also available at your convenience to accelerate your value.

Watch a no-pressure webcast with one of our Cloud Advisor technical experts and see how to improve the alignment between your apps and their cloud environments.

We’re glad you are here! Densify™ customizes your experience by enabling cookies that help us understand your interests and recommend related information. By using our sites, you consent to our use of cookies. Learn more.